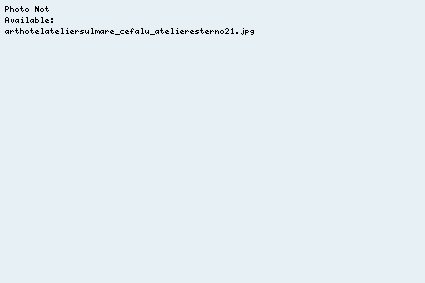 Be the first!   Write a review

The Atelier sul Mare is a museum-hotel of contemporary art unprecedented in the world just few meters from a wonderful sea, situated at Castel di Tusa (Me), near Cefalù, on the coast between Messina and Palermo.

Atelier sul Mare is a Hotel-Museum of Contemporary Art is unique in the world! Was created with the intention of offering the visitor-guest the opportunity to live in a unique work of art, becoming himself part of it, which turns and turns in turn.
Enter and park in these spaces Emotional means to live a new dimension of the spirit, enjoying the joy of existence, that only the creativity of art can give. Art, therefore, as compared with the great questions of human existence, for itineraries of deep spirituality. Experience the beauty, manifested by the great art forms, constitutes an immense wealth of real life and tradition that we need to rediscover and pass.

Antonio Presti, creator and founder of the prestigious "Fiumara d'Arte" park Outdoor sculptures largest in Europe, is the creator of this unique reality where the landscape, culture, art and hospitality come together to show and give to the visitors to this magnificent land an unforgettable experience: the art lived as a dream.

L'Atelier sul Mare thus becomes the focal point of the tourist route - Cultural Park of Sculptures "Fiumara d'Arte", that the works of Party, Consagra, Staccioli and many other international artists, will accompany the visitor to a meeting with a 'art harmonized with the landscape, visible and accessible to all, in the name of beauty.

La bocca della verità (1990) Mario Ceroli Ceroli's work is represented by the presence sculptures/furniture. The main element is the large beda "Truth Mouth". The room is also marked by the wide wardrobe which does not conceal anything. Instead, in its being alpha and omega, it represents the alternation of seasons, the beginning and the end.

Mistero per la luna (1991) Hidetoshi Nagasawa "I imagine the visitor stepping into the Atelier, going to the reception desk, getting to the room with his/her key and locking himself/herself in". Il nido (1991) Paolo Icaro Paolo Icaro lived four weeks in Castel di Tusa like a common guest, right in the room he was supposed to re-shape, awaiting inspiration. "Little by little, the walls of my imagination began to open up, thought became homogeneous and visualised as a single object: it was not placed like a mushroom, but a subject-object. I thought of a nest" A sculpture originated from that train of thoughts: it can be enjoyed not only with eyes, but with the whole body: by day, at night, alone, with a partner. A sculpture awakening curiosity, interest, meditations, thoughts, that is critical process. From the nest, form the shell point, through a narrow opening, the guest catches a glimpse of the sea.

Linea d'ombra (1992) Michele Canzoneri A highly impressive setting is provided by the room reinvented by Michele Canzoneri, the artist who created the glass windows of the Cefalù cathedral. The bed is installed on a large wooden raft, whereas the floor is made up of blue ceramic stripes, whose hues evoke the sea waves. However, the real coupe de theatre is the bath-tub excavated in the terrace and almost floating on the sea. A blue sea and a raft, representing a kind of anchorage, harbour, wooden isle, essential reference point.. The raft becomes a chair, a bed, a table, whereas the floor will be covered by blue ceramic, almost an extension of the sea. The sanitary facilities have been camouflaged and placed in brass containers, just like in ships. From the windows the guest will enjoy a breathtaking view of the boats sailing across the sea. Many things can happen on the raft/melting-pot. "tu guardi il mare ad ogni primiera", would say Verlaine. As light changes, you watch the ever-changing colours of the sea and keep feeling, meditating, understanding."

Stanza del mare negato (1992) Fabrizio Plessi The protagonist is here the marine environment, as reinvented by the artist. The room walls are entirely covered by old wooden doors from the neighbouring villages. These doors beg for silence. Their stories, their being crossed, their joys, their sorrows confer the room a great sacredness. High above , opposite the bed, six monitors, show a sea setting, whereas the real sea is disclosed from a window the guest will have to discover. The large window was shut: reality was driven out and re-created elsewhere, thanks to electronics. The sea: six monitors broadcast its image day and night. But even if the guest steps into the room at midnight, he/she will find the daylight and the voice of that sea we longer listen to. Thanks to technical devices.

Energia (1992) M. Mochetti Here the artist Maurizio Mochetti carried out a research on light. The ordinary white light lets Mochetti's work appear quite normal. The red furniture was intentionally over-dimensioned, the large wardrobe is no longer a clothe container, but becomes space itself. After viewing those strange forms and pieces of furniture, the red light is switched on and space undergoes a radical transformation. The warm red colour envelopes the room, thereby creating an atmosphere of great cosiness and a moment of suspension exalted by the great swinging window, offering a view on the sea, as unique endless possibility.

Trinacria (1993) Maurizio Staccioli Here the artist created a very narrow entry, by letting a door revolve on a door was inspired by Sicily's triangle form, the room's basic colours are black and red, that is, the sun and the volcanoes, dominating the isle landscapeandaffecting the inhabitants' history and mentalities. An imposing red triangle stands on one of the three vertices of the white triangular bed. Functionality isoffered by these two large triangular shapes marking the whole place. The walls are made out of a knead containing the Etna's lava: such stone symbolically represents the mighty fire of the volcano the sacred land of Sicily was born from.

Su barca di carta mi imbarco (1993) Maria Lai Maria Lai, the great Sardinian artist, invented this space while attempting to convey the emotions of the travellers visiting Sicily and Sardinia - the two large Mediterranean isles. This work of art draws inspiration from the bath, a place full of water and energy. The guest finds himself/herself under a roof (a water-fall) dipped in an iconographic journey of fishes and marine colours. Then, he/she emerges from water and in the room finds the black and the blue, that - together with the sea and the wind - are the two dominating colours and elements in Sicily and Sardinia. The imaginary constellations are represented by the large bed cover and the brass wires crossing the room all over. This great tangle shows us how emotions and astonishment may originate from chaos. The silence of both islands is contained in the force of a split stone placed before the bed.

La torre di Sigismondo (1993) Raoul Ruiz Here you are offered the opportunity to be seawhile watching the sky. The room is a huge empty black cylinder with a round bed in the middle revolving around itself. The roof is opened by means of special handles and the miracle of art appears: stars revolve all around, and from this dimension of oppressed prison you are offered the opportunity to be elsewhere.

Sogni tra segni (1994) Renato Curcio, Agostino Ferrari This work is a tribute to ideological utopia. The idea was conceived by Renato Curcio and Agostino Ferrari. Protagonists is graphic expression, from rock paintings to modern writing. Man's knowledge is impaired by communicative, religious, ideological codes: such codes are inscribed on an imaginary sheet of paper enveloping the whole room. Sogni tra i segni symbolises isolation, which can be overcome only by art and its irrepressible urge of freedom. Accordingly, the artist Agostino Ferrari created the great web over the bed. Real freedom begins and ends with codification, that is why the bath is abrickwork resembling a cave, a pure, primordial place the artist firmly believes in.

La stanza del profeta (1995) Omaggio a P. Pasolini (D. Bellezza, A. Cambria, A. Presti) It is Antonio Presti's tribute to Pier Paolo Pasolini, his works, his prophecies, his life. The guest enters the room through a door not to be opened, but knocked down. On the door a prophetic poem written by Pasolini is inscribed: a text revealing its great modernity, and its offended, violated values. After treading on the inscription, the guest goes through a long labyrinth-like corridor, kneaded with straw and mud. The great Yemenite room was inspired by the "Flower of the Arabian Nights": the poem itself, written in Arabic, delimits the space. The large bed brings our mind back to a powerful image (Andrea Mantegna's "Christ Deposition") and enhances the strong sacredness of the place. The large window offers the guest the great director's cinematographic experience: in fact, an extraordinary vision was here obtained, where cosmos is the absolute protagonist. Under the great window someone symbolically placed sand from the Ostia hydroport - the murder place. Here there is no inscription at all, and we do nor care about the murderer's name. This way, Antonio Presti aims at pointing out our belonging to the system, our potential being either murderers or prophets. On the bath door, a wonderful poem written by Dario Bellezza exalts all the great love for his friend Pier Paolo. The roof is covered by pipes and ventilators, creating a car-wash atmosphere. A place where our bodies are washed and centrifuged, just like the car which crushed Pasolini's body.

La stanza della pittura (1996) P. Dorazio, G. Marini This room exalts the great value of rooms painted in fresco, once more, just like in past times. When faced with the charming chromatic effects, the walls resembling side-scenes, the guest is offered the opportunity to become picture himself/herself. It is the approach to art exalted by the large window overlooking the sea, created by Tano Festa at Villa Margi , a few kilometres away from the hotel.

La stanza della terra e del fuoco (1996) Luigi Mainolfi Two elements are instrumental in experiencing this work: terracotta and fire. The walls are entirely covered by terracotta fragments, creating a strongly evocative atmosphere. In the middle of the room, the large bed causes a moment of great suspension. The sculptural element is represented by the big iron chair, which is deprived of his traditional function and communicates "the freedom" of being knowledge, thought. In fact, in his being "torsion", the chair becomes a minute sign and almost magically touches the exploded terracotta wall. While sitting and experiencing that emptiness, that subtraction, that transition from particular to general, the guest is set free and discovers his belonging to space.

Castel di Tusa is a small fishermen village located on the northern coast of Sicily.

How to get there

By Car from Palermo: take the highway A20 PA-ME until Tusa, from there the SS 113 until Castel di Tusa; (1 hour time)

By car from Messina: Take the highway A20 ME-PA until Tusa, then exit and take the SS 113 (direction Messina) until Castel di Tusa.

The nearest airport is the "Falcone-Borsellino" of Palermo. the airport is connected with the train station.

Read about Art Hotel Atelier Sul Mare in your own language